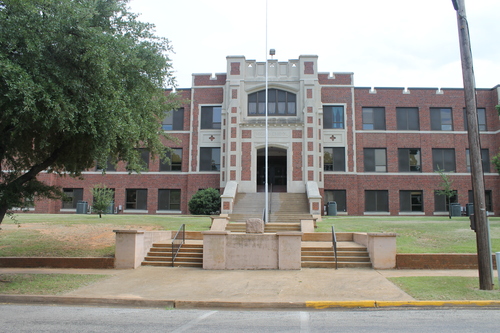 The History of Marshall Public Schools

Public education in Marshall had its roots in an institution chartered during the days of the Texas Republic. The charter of this institution -- known as Republican Academy, Marshall University, Van Zandt University and White Boys' College -- was signed on Jan. 18, 1842, by President Sam Houston. Previously, education was left largely to parents or a few neighbors who could hire a teacher to instruct a small group of children.

On March 27, 1843, Peter Whetstone donated 10 acres to the new Marshall institution because of his "interest in the progress of literature." This tract was bounded by Houston, College, Whetstone and Rosborough streets -- the present-day site of Marshall Junior High. During the first decade, the Republican Academy was maintained in a 20 by 40, "hewn log house" with a one-room addition in 1849 for the Female Department. However, co-education ceased in 1850 when the girls were sent to Masonic Female Institute, bounded by North Franklin, North Wellington, West Burleson and West Grand streets. The Male Department continued as Marshall University, which in 1851, erected a $10,000 two-story brick building.

Local public education began when the facility of Marshall University was rented to the city in 1884 for educational purposes. No buildings were owned by the schools at that time. Much of the public "Children's Fund" was used in renting the University building, the Female Institute and a few old churches in the city. The fund provided about 4 1/2 months of school, with the remainder being financed by tuition.

Through the influence of W.L. Lemon, principal of the Masonic Female Institute, and Y.D. Harrison, principal of Marshall Male College, the city was petitioned to hold an election to determine if people would approve a tax for public schools. The election was held in 1886, and it was a complete failure.

In 1887 the Commissioners Court created the office of County Superintendent and named Mr. Harrison to the post. A few weeks later, the city school board appointed him City Superintendent. Changes began to occur; a uniform system of school books was adopted, a strict system of grading went into effect, co-education was recommended and a tax to support a nine-month school year was advised. The second election also failed, but a few years later, the school tax finally carried. 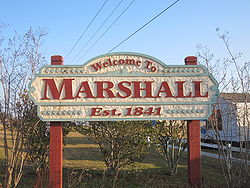 Marshall is the county seat of Harrison County in northeast Texas, located 40 minutes from Shreveport, La., to the east and two hours from Dallas-Fort Worth to the west. Marshall is a major cultural and education center in East Texas and the tri-state area, with Marshall Independent School District and its 11 campuses as well as three colleges: East Texas Baptist University, Wiley College and Texas State Technical College.

Marshall was a political and production center of the Confederacy during the Civil War and was a major railroad center of the T&P Railroad from the late 19th century until the mid 20th-century. The city is known for holding one of the largest light festivals in the United States, the Wonderland of Lights, during the Christmas season.

Marshall was founded in 1841 as the seat of Harrison County. The Republic of Texas decided to choose the site of land granted by Peter Whetstone and Isaac Van Zandt after Whetstone had proven that the hilly location had a good water source. The city quickly became a major city in the state because of its position as a gateway to Texas on several major stage coach lines. By 1860, Marshall had become the fourth largest city in Texas and the seat of the richest county. During the Civil War, Marshall became the capital of Missouri’s Confederate government-in-exile.

Marshall’s Railroad Era began in the early 1870s. Harrison County citizens voted to offer $300,000 bond subsidy, and the City of Marshall offered to donate land north of the downtown area to the Texas and Pacific Railway if the company would move to Marshall. T&P accepted and the railway’s workshops and general offices for Texas were moved to Marshall.

By 1880 the city’s population had exploded, and Marshall had become one of the largest cotton markets in the South. The city’s new prosperity included the opening of J. Weisman and Co., the first department store in Texas, and the installation of a single light bulb in the Texas and Pacific Depot which made Marshall the first Texas city with electricity. The city’s most prominent industry, pottery manufacturing, began with the establishment of Marshall Pottery in 1895.

During the mid-20th century the city lost many of its landmarks. Some buildings were demolished because their owners disregarded their historic importance and preferred “modern” structures, others were demolished because their owners felt they could no longer afford to maintain them. By 1990, Marshall's opera house, the Missouri Capitol, the Moses Montefiore Synagogue, the original Viaduct, the Capitol Hotel, and the campus of Bishop College (including the Wyalucing plantation house) had been demolished. In the 1970s the city began to look at the preservation efforts of nearby Jefferson, increasingly developing a preservationist trend throughout the remainder of the 20th century.

In 2015, Marshall was named an All-America City by the National Civic League. This elite honor epitomizes the essence of Marshall and its residents' efforts to improve and to serve each other.